One of the UK’s leading concrete scanning firms, we’re made up of time-served structural investigation engineers, each with over 10 years’ experience working on some of the nation’s most recognisable projects.

Firmly at the forefront of concrete scanning technology, we use cutting-edge ferroscan, GPR scanning and ultrasound equipment to interrogate your structures, providing an insight into sub-surface elements, dimensions and anomalies. In doing so, we help educate the construction process, reducing stress within your team, enhancing productivity and practically eliminating downtime in the process.

As well as slabs, columns and beams, our concrete scanning specialists are able to use their non-intrusive technology to analyse larger concrete structures such as bridges, dock walls, tunnel soffits and more.

We understand that concrete scanning is often an unforeseen requirement, frequently not factored in to either budget or programme. As such, both time and costs can be of the essence. We are committed to offering a quality service at a genuinely competitive price, fielding multiple teams throughout the UK and able to respond promptly to any concrete scanning requirement. If you’re worried about GPR scanning costs or any other scanning costs, please get in touch to discuss concerns with us.

The best way to contact us about our Structural and Concrete Scanning services is directly through our website. Just leave us your details and a quick overview of what you need, and we’ll get back to you as soon as possible. 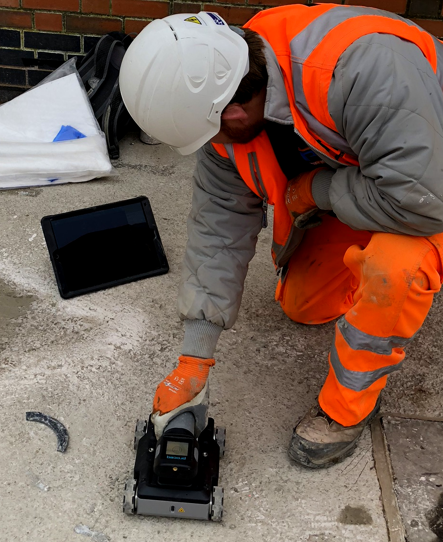 Navigate quickly to your chosen service:

Every one of our engineers and technicians has at least 10 years' experience in structural investigation, scanning and materials testing.

Our beautifully formatted reports are delivered promptly whilst getting straight to the point, providing the data you need direct to your inbox.

We take pride in the professionalism and attitude of our staff. From first contact to reporting, we'll treat you as we'd like to be treated ourselves.

Every year, we complete hundreds of projects for a truly loyal client base, firms that return time after time, confident in the service they'll receive.

Our teams travel the length and breadth of the UK, delivering structural investigation and testing services on a truly diverse range of sites.

Using the very latest technology and techniques, we help reduce unexpected costs, keeping your team, project and organisation safe in the process.

By far the most popular form of concrete scanning, as the name would suggest, a ferroscan survey is used to detect and position rebar within reinforced concrete in much the same way as a covermeter survey. Unlike that more basic approach, however, the ferroscan can also determine both bar diameter and spacing, letting an experienced user build up a far more detailed picture of sub-surface conditions.

Determined to stay at the forefront of concrete scanning technology, all of our teams use the very latest ferroscan instruments, the all-new Hilti Ferroscan PS300. Site conditions allowing, this revolutionary new instrument is able to provide the following details down to approximately 200mm below the surface…

That’s up to 100mm deeper than its predecessor, the otherwise Hilti Ferroscan PS250. A ferroscan survey can also detect other metallic objects (e.g. steel cables) but, as the name would suggest, is unable to detect non-metallic items.

Quick Scans – The lateral position of any rebar can be marked directly onto the slab, column or beam itself using chalk, paint stick or similar. This seemingly rudimentary approach is perfect for those intending to drill or core through concrete. Not only is it quick, providing instant results, it also lets the client drill cleanly, missing any reinforcement on the way through.

Image Scans – For those requiring more in-depth information, image scans are the preferred route. Granted, this type of ferroscan survey takes longer to perform and the results cannot be analysed in situ. That said, once the surveyor has returned to base, the data can be downloaded to their computer for analysis within Hilti’s Profis software. At this point, cover depth, bar diameter and bar spacing measurements can be extracted. ‘Slices’ through scans as well as the overall mesh layout can also be output. These images can be added to reports or CAD drawings according to your specifications.

A somewhat different approach to the more traditional ferroscan, our Hilti PS1000 and Proceq GPR Live ground penetrating radar systems are developed specifically for the interrogation of structures. With a substantially greater operating depth, these tools are able to provide an incredibly detailed picture of sub-surface conditions.

By no means an exhaustive list, GPR concrete scanning can help identify the following…

Whilst it does have its limitations, concrete specific ground penetrating radar has helped revolutionise the field of concrete scanning, having a number of advantages over more traditional types of surveying.

A real step forward in the field of concrete scanning, ultrasonic testing has changed the way both we and the wider industry attempt to locate defects within concrete structures.

At Perry Testing, we’ve embraced the very latest in ultrasonic testing technology – the Proceq Pundit PE200 – in order to identify a whole range of structural defects in concrete. These include, but are not limited to…

Quite commonly, the ultrasonic testing of concrete may only be required from one side of the object, making access issues a thing of the past. What’s more, thanks to the nature of the device, we’re often able to provide critical data there and then, reducing down time and maintaining productivity on site. Naturally, however, these insights can be followed up by detailed drawings and reports highlighting any areas of concern.

Interestingly, the same technology can also be used to provide valuable information on the strength and uniformity of a whole variety of materials including…

A simple and cost-effective form of concrete scanning, a cover meter survey is intended to locate reinforcing bars (or ‘rebar’) within concrete as well as providing an accurate determination of cover depth – the distance from the surface of the slab to the top of the rebar.

Designed for exactly this purpose, a cover meter is a handheld instrument that uses pulse-induction technology to induce electromagnetic pulses into a concrete slab. The closer a reinforcing bar is to the surface, the stronger the magnetic field it will generate, thus making it possible for a covermeter survey to determine cover depth.

Until the advent of the Hilti Ferroscan, the cover meter was the only reliable method of determining cover depth. That said, if you don’t need to know bar diameter and spacing (features of the more advanced Ferroscan tool), a cover meter survey could still be the service your project requires. Indeed, lower equipment costs and reduced reporting time means that cover meter surveys can prove particularly cost effective.

"Perry Testing has always been very reliable and flexible when accommodating works on site, providing innovative solutions to complicated problems."

"We needed to locate rebar within a concrete roof slab in order to install a comms mast. Perry Testing responded quickly and offered really good value for money. Highly recommended and would use again."

"Thanks again for the rebar checks you did for us. Really prompt & good value too, much appreciated! We'll be in touch again soon I'm sure."

"We have used PTL on numerous projects to locate reinforcement in concrete beams, walls and floors. The service provided is always good and very professional from the very start to completion."

“Having used Perry Testing for a number of years now, I can honestly say we wouldn’t consider using anyone else for our structural investigation and scanning projects. Their work is impeccable and their reports prompt and informative. I wouldn’t hesitate in recommending their services.”

Looking for advice on concrete scanning?

Want to learn more about concrete scanning? Need a quotation? Get in touch! A member of our team will be only too happy to help! 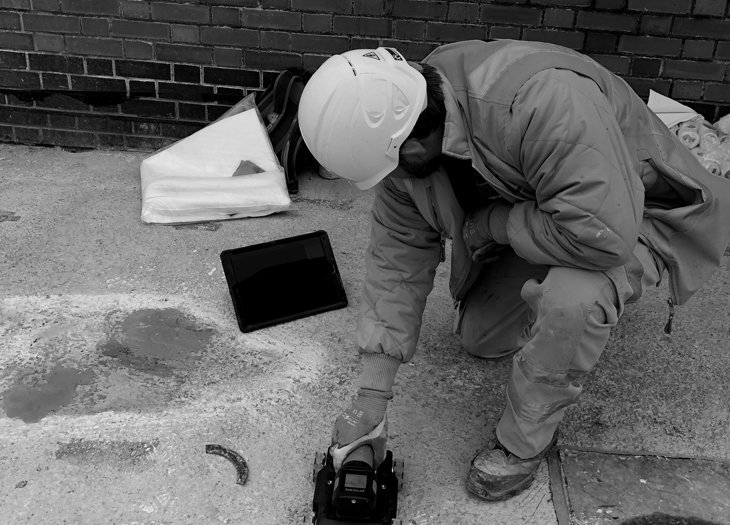